The Bethel College Oratorio Chorus and the Bethel College Philharmonia present the overture to Beethoven’s opera Fidelio, his Fantasia for piano, orchestra and chorus, and Te Deum by Bruckner, with vocal soloists, May 8 at 3 p.m. in Memorial Hall.

Chris David Westover, Bethel director of instrumental music, is the music director for the 2016 Masterworks performance. . . .

The second Erwin C. and Verna Kaufman Goering Award will be presented during the mid-point of the concert to Rupert Hohmann ’49 of North Newton, former Bethel music professor and professor emeritus of music at the University of Wisconsin-Eau Claire.

Hohmann began studying violin as a child and has played throughout his life. He earned a master’s degree in music from Wichita State University and became the first Newtonian to join the Wichita Symphony Orchestra.

From 1953–55, Hohmann spent two years in I-W service as a music therapist at the Philadelphia State Mental Hospital. He came back to Bethel in 1957 to teach studio violin and music classes and direct the orchestra.

He was the first at Bethel to conduct an opera or musical (in this case, a production of Smetana’s The Bartered Bride) with orchestral accompaniment rather than piano alone. He continued to play with the WSO and soloed with the Newton Mid-Kansas Symphony Orchestra. . . .

In 2014, the family and friends of Verna Kaufman Goering ’37, Moundridge, and the late Erwin C. Goering ’40 established a music award, given biennially, that honors a Bethel alumnus of outstanding character for distinguished achievement and recognition in music.

The awardee may be a professional musician or a volunteer who has served the community; may demonstrate excellence in instrumental music, vocal music and/or conducting; may be a donor whose gifts have substantially strengthened Bethel’s music program. Daniel Hege ’87, music director of the Wichita Symphony Orchestra, received the inaugural Goering Music Award. 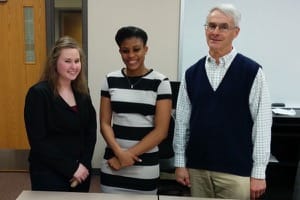 Three Bethel students presented posters at the National Conference on Undergraduate Research April 7–9 at the University of North Carolina-Asheville.

Azucena Gonzalez, senior from Newton, Brianna Newport, sophomore from Haysville, and Charity Griffin, freshman from Oklahoma City, traveled to North Carolina. Bethel professor of psychology Dwight Krehbiel (pictured at the right with Griffin, center, and Heather Eddy, senior from Park City, left) advised the students and helped them prepare for the trip.

Nine Bethel students were involved in preparing the posters.

Gonzalez presented the poster that she, Cayla Lawless, junior from Burlingame, and Jesse Davis, freshman from Centennial, Colorado, had prepared. Their topic was “Early Season to End-of-Season Comparisons of Cognitive Performance in College Football Players.”

Griffin presented “The Reliability of the Balance Error Scoring System in the Sport Concussion Assessment Tool.” She and Eddy worked together on the research and poster. 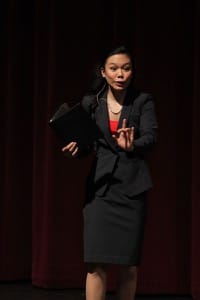 Eight Bethel team members earned the Thresher forensics program a ranking of 35th in the United States when they competed at the American Forensic Association’s National Individual Events Tournament (AFA-NIET) April 2-4 at the University of Florida in Gainesville.

Competing alongside schools representing a wide variety of divisions — NAIA, DIII, DII, DI and others — Bethel moved up two spots in the national rankings from their 2015 placement.

While the overall winner was The University of Texas, Bethel came in ahead of other notable schools, including Cornell University, Louisiana State University, Texas Christian University, UC Berkeley and others, as well as Sterling College, the only other Kansas Collegiate Athletic Conference school to qualify for and attend the AFA-NIET this year.

“In addition to earning more points and a higher national placement than last year, it was especially rewarding that every single student on the team earned points toward the final team placement,” said Mallory Marsh, head forensics coach. 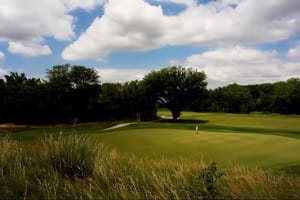 The Bethel men’s basketball team will host its second annual fund-raising golf tournament Saturday, May 14. Anyone is welcome to participate in the four-person scramble at Sand Creek Station Golf Course, Newton. The tournament starts at 9 a.m., following check-in.

Every gift counts as June 30 approaches

Have you made your annual gift to Bethel yet this year? Bethel's fiscal year comes to a close June 30, and every gift toward the 2015–16 Bethel Fund goal of $1.4 million in donations counts!

Undesignated contributions given in response to the annual phonathon go to the fund, as well, supporting the array of opportunities given Bethel students. If you’ve not yet fulfilled your pledge, please do so by the end of June.

It’s easy to give! Just:

Bethel appreciates the generous support already given this year and invites others to join those who have already donated. Thank you in advance for your gift as we work to raise $1.4 million and, once again, bring the college’s fiscal year to a satisfying close. 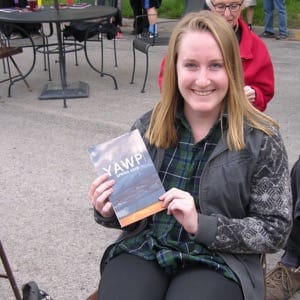 Bethel students launched the spring issue of their literary magazine, YAWP!, April 28 with music, readings and food in Mojo’s.

This is the second printed edition (following online editions in fall 2014 and 2015 and the first printed edition last spring) since the literary magazine underwent its transition to YAWP! from the previous bclines.

A painting by senior Natalie Unruh (pictured), Clay Center, graces the cover. “Harvest is Over” is the title of the art piece.

“It’s double the size of last [spring’s], and absolutely gorgeous,” she said.

The spring 2016 edition of YAWP! includes poetry, fiction, nonfiction and visual art by 21 Bethel students and, for the first time, contributions from an alumnus, Miner Seymour ’91 of Moundridge (two poems and a visual piece).

The issue is available at Thresher Shop during business hours, 8 a.m.–5 p.m. Monday–Friday. Copies are free for Bethel students, $3 for others (including faculty and staff). 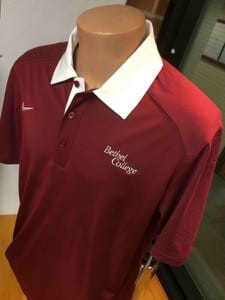 As Bethel seniors of 2016 celebrate the culmination of their college career, what better way to reward their hard work than a gift from Thresher Shop!

Thresher Shop will be open the week leading up to graduation, as well as the Saturday and Sunday of graduation. However, the store is offering an exclusive online 20-percent discount on apparel to all THRESHEReview readers in advance of graduation.

To receive the discount:

Pay by credit card or via PayPal. And, Thresher Shop can ship almost anywhere in the world. 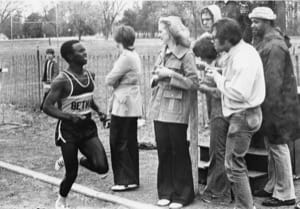 Kauffman Museum celebrates Bethel’s track and field history as part of its current exhibit, Root for the Home Team: Building Community through Sports, on display through June 5.

Beginning in the mid-1970s members of Bethel track and field teams excelled under the leadership of coach George Rogers ’69. Artifacts on display from that era include the 1974 Kansas Collegiate Athletic Conference championship banner, 1975 KCAC men’s trophy and the 1979 KCAC women’s banner.

There still room in this summer’s Uncle Carl’s Camps for children, but the one-week, half-day sessions are filling up. Here’s the lineup:

For more information or to register, e-mail Andi Schmidt Andres or call 316-283-1612. A downloadable brochure is available.